First loose tooth, toddler in my bed, and a terrorist puppy!

We've been in our new house for 3 months already!  Settling in nicely, slowly but surely - still a couple of boxes that aren't unpacked yet, haha, I guess if I haven't needed those things in 3 months, I never will, right?!

Mia's turning 6 next month.  Her first tooth is loose! Quite an exciting milestone, what a new stage ahead of us, with toothmouse visits - although Mia feels a bit unsure about this whole process - wanting to know if it's painful when her tooth falls out, will there be lots of blood, is it a real mouse and how does it know and how does it get into our house... 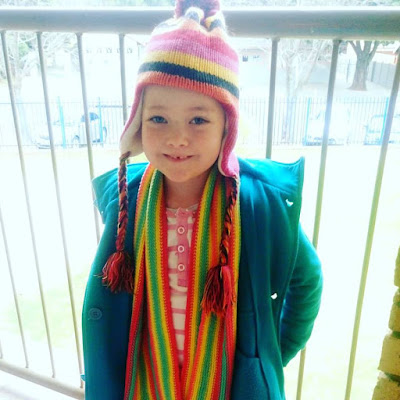 Mia's been doing speech therapy classes for two months now, and it's already made a big difference - this weekend she started pronouncing the "r"-sound correctly in Afrikaans for the first time. She's always just pronounced it as an English-sounding R.  The last 3 days she walks around sounding like a motorbike about to take off, "rrrr!"  "rrrr!"  "rrrrrrrrrrr!"

Little Ella has adjusted so well to playschool.  In September we'll go from the current 3 mornings a week, to 5 mornings a week.  I drop her off first, at 7h30, and then take Mia to school who only needs to be there at 8.  I fetch Ella earlier though - her school actually comes out between 12 and 12h30, but I fetch her just after 11h30 - she's so tired and not keen on story time that they have then - she lies down on the carpet in front of the door waiting for me!  She naps as soon as she gets home.  Luckily my time is flexible enough that I can continue fetching her earlier until she's keen on story time. 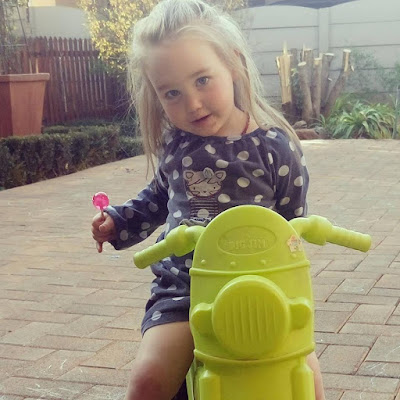 Ella doesn't sleep very well...  She doesn't want to go to sleep alone at night - she has no problem with her day nap in her room - but at night I have to sit with her until she's asleep - and I have to wait until she's in a deep sleep, because she keeps checking that I'm still there!  Then she wakes up around midnight, and refuses to sleep in her bed further, so I've been putting her in bed with us.  Not ideal, but I literally don't know what else to do.

I've spent hours reading up on toddler sleep, and mostly the advice comes down to sleep training.  I just can't do that.  So for now, we'll just do what's currently working for us. (Although it's not exactly working for us, just can't get a proper night's rest with her restless kicking and turning, and then she wakes up when my alarm goes off, whereas in her bed she would probably have slept a bit later.)

Lily the Weimeraner puppy is 6 months old and an absolute terrorist!  She has eaten so many of the girlies toys, she's digging up the garden, she's so clumsy and jumps up on people so much that we have to banish her outside when we have visitors...  Yikes.  Hoping it'll get better once the puppy stage passes...  She's a beautiful dog though, and a very loving nature, loves to cuddle us on the couch. 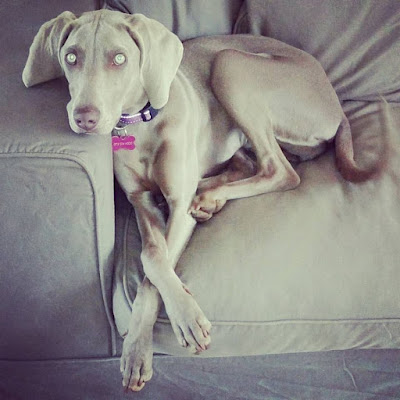 Blogs I love to read

JessV
I do my best to live well, laugh often, and love much. I've been married since September 2007, to my soulmate and my rock. We have a two daughters, Mia was born in September 2010 and Ella in April 2014. They are beautiful, adorable, funny, sensitive and so, so precious. I run my own business, a skincare centre. I love what I do! I'm on a constant weight loss mission... Am hoping that this is the year I shed the final stubborn kilo's!